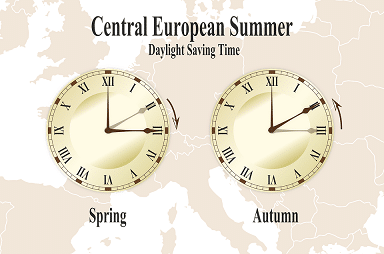 President of the European Commission Jean-Claude Juncker argues in favor of putting an end to the clock shifts and install summer time permanently. From a chronobiological perspective the abolition of the shift to DST and back is a good move. However, the permanent installation of summer time would be particularly bad for the health of large groups of Europeans. For the Dutch and other people living far into the West of our time zone, in midwinter daylight only starts at 10am, while for Scandinavian people this might be even later. While we need the morning light to keep our biological clock, that has a period longer than 24 hours, in sync and thus be able to quickly fall asleep in the evening and wake up in the morning feeling refreshed, the evening light does not have this effect. Also, more winter depression appears to be correlated to later sunrise.

Dr. Marijke Gordijn from Chrono@Work has argued for maintaining winter time with Mrs Annie Schreijer-Pierik, member of the European Parliament’s Committee on Public Health, and lobbyist for abolishing the DST clock shifts: “Winter time should be standard. And now is the time to decide to not switch the clock again in March, she says.