A revision of existing Karolinska Sleepiness Scale responses to light: A melanopic perspective. 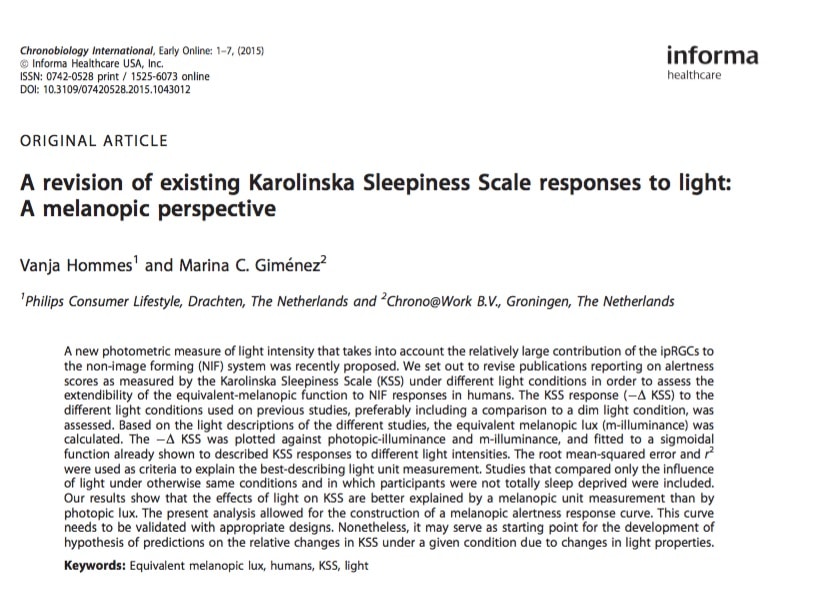 A new photometric measure of light intensity that takes into account the relatively large contribution of the ipRGCs to
the non-image forming (NIF) system was recently proposed. We set out to revise publications reporting on alertness
scores as measured by the Karolinska Sleepiness Scale (KSS) under different light conditions in order to assess the
extendibility of the equivalent-melanopic function to NIF responses in humans. The KSS response (D KSS) to the
different light conditions used on previous studies, preferably including a comparison to a dim light condition, was
assessed. Based on the light descriptions of the different studies, the equivalent melanopic lux (m-illuminance) was
calculated. The D KSS was plotted against photopic-illuminance and m-illuminance, and fitted to a sigmoidal
function already shown to described KSS responses to different light intensities. The root mean-squared error and r2
were used as criteria to explain the best-describing light unit measurement. Studies that compared only the influence
of light under otherwise same conditions and in which participants were not totally sleep deprived were included.
Our results show that the effects of light on KSS are better explained by a melanopic unit measurement than by
photopic lux. The present analysis allowed for the construction of a melanopic alertness response curve. This curve
needs to be validated with appropriate designs. Nonetheless, it may serve as starting point for the development of
hypothesis of predictions on the relative changes in KSS under a given condition due to changes in light properties.