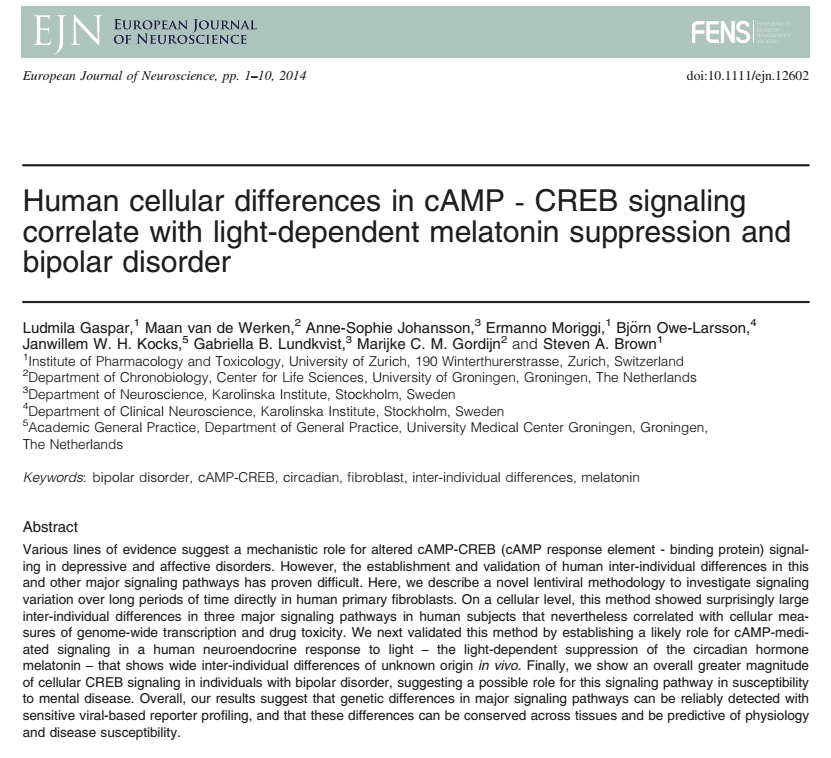 Various lines of evidence suggest a mechanistic role for altered cAMP-CREB (cAMP response element – binding protein) signaling in depressive and affective disorders. However, the establishment and validation of human inter-individual differences in this and other major signaling pathways has proven difficult. Here, we describe a novel lentiviral methodology to investigate signaling variation over long periods of time directly in human primary fibroblasts. On a cellular level, this method showed surprisingly large inter-individual differences in three major signaling pathways in human subjects that nevertheless correlated with cellular measures of genome-wide transcription and drug toxicity. We next validated this method by establishing a likely role for cAMP-mediated signaling in a human neuroendocrine response to light – the light-dependent suppression of the circadian hormone melatonin – that shows wide inter-individual differences of unknown origin in vivo. Finally, we show an overall greater magnitude of cellular CREB signaling in individuals with bipolar disorder, suggesting a possible role for this signaling pathway in susceptibility to mental disease. Overall, our results suggest that genetic differences in major signaling pathways can be reliably detected with sensitive viral-based reporter profiling, and that these differences can be conserved across tissues and be predictive of physiology and disease susceptibility.